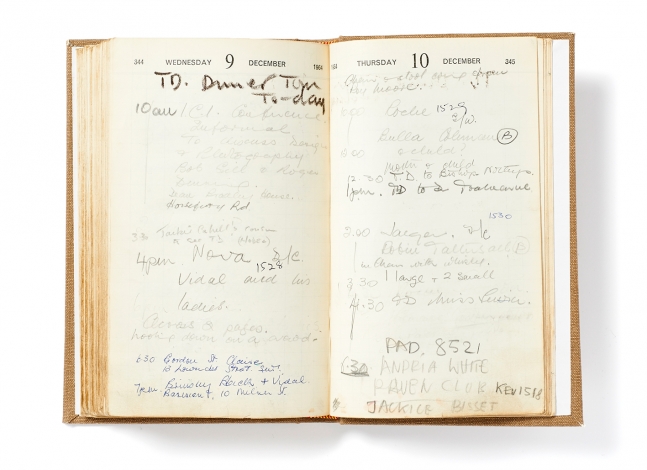 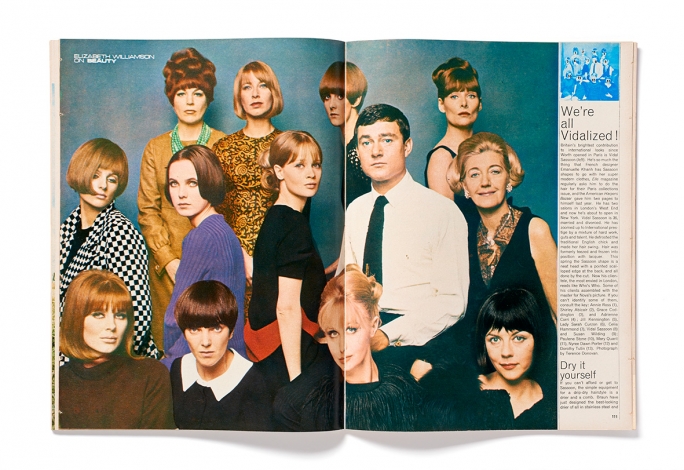 A page from Terence Donovan’s 1964 diary.

Donovan was a diligent diarist, keeping them throughout his 37 year career. The diaries were a working calendar - used to record shoots, meetings, lunches and appointments rather than reflective accounts of daily activity or inner musings. He used shop-bought Letts diaries and subsequently had them smartly re-bound in cloth, red leather and embossed gold foil by a bookbinder in east London - his early training in lithography left a lasting appreciation for the skill of craftsmen at work in the print workshops, presses and binderies that existed in unlikely corners of 50s and 60s London.

This page from the 9th December 1964 records a 10am “Conference informal. To discuss design and photography’ with the American graphic designer Bob Gill and Roger Denning, Director of the Kynoch Press that had, earlier that year and in partnership with D&AD, published Donovan’s esoteric collection of photographs ‘Women throooo the eyes of smudger Terence Donovan’.

At 4pm on the 9th December, Donovan was photographing ‘Vidal and his ladies’ for Nova; “Across 2 pages looking down on a crowd’. The resulting image was published in the March 1965 issue - swipe across to see Sassoon (“He’s so much the thing”) surrounded by his top clients of the day including Mary Quant, Grace Coddington, Celia Hammond, Paulene Stone and Lady Sarah Curzon.

At 7pm, he was meeting Vidal Sassoon again, along with ad exec Brinsley Black, before heading to dinner with Tom Wolsey, Art Director of Michael Heseltine’s ‘Town’ magazine.

Although it would be wonderful to have Donovan’s personal insights into those heady days of his burgeoning career (in 1964 he was 28), these diaries do provide a tempting glimpse of the frenetic pace of his early working life, and a sense of the swirling and overlapping social and creative scenes of 60s London.