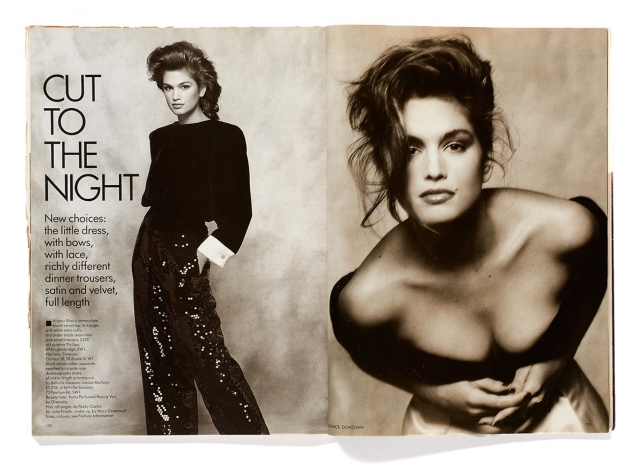 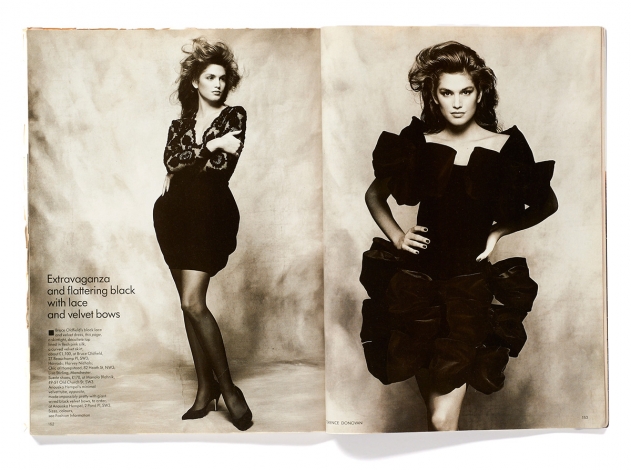 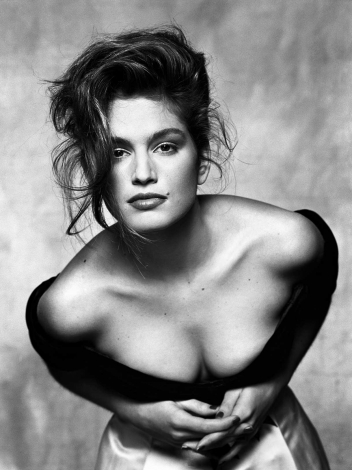 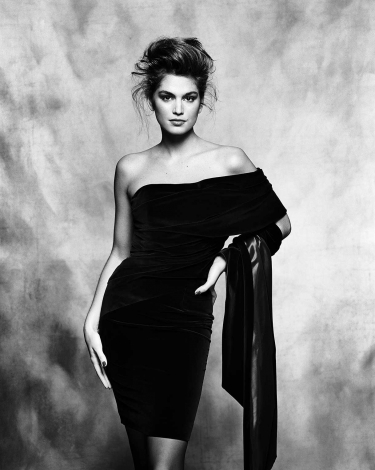 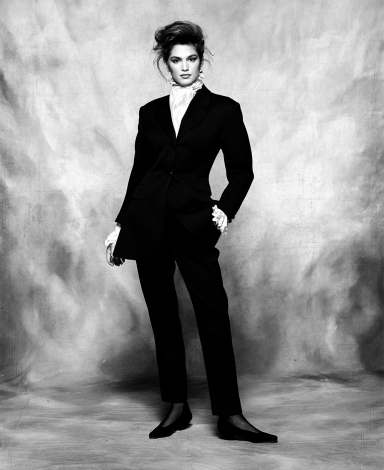 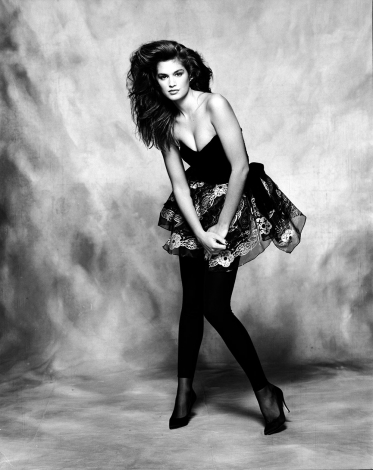 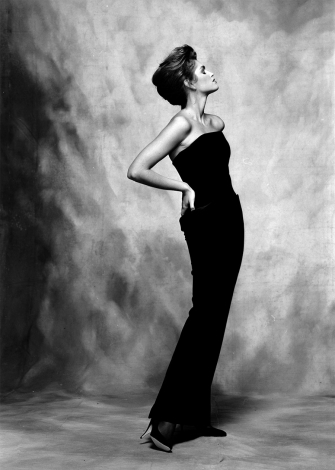 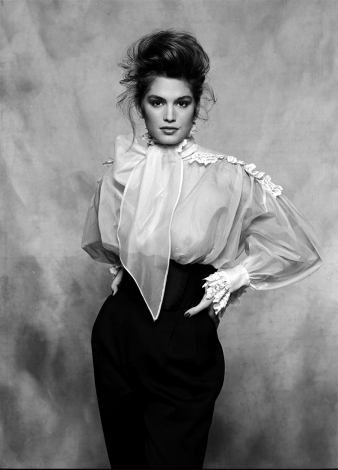 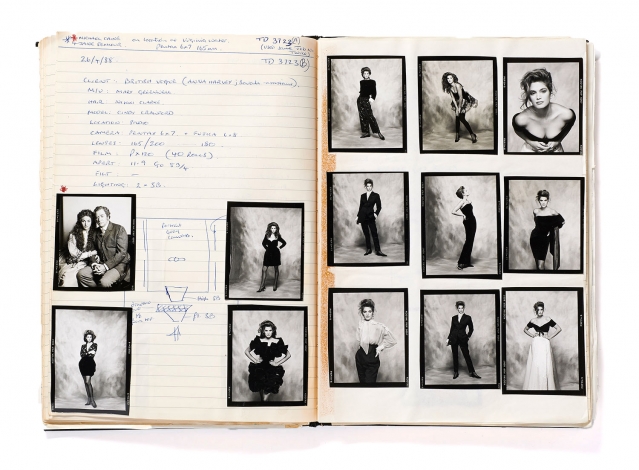 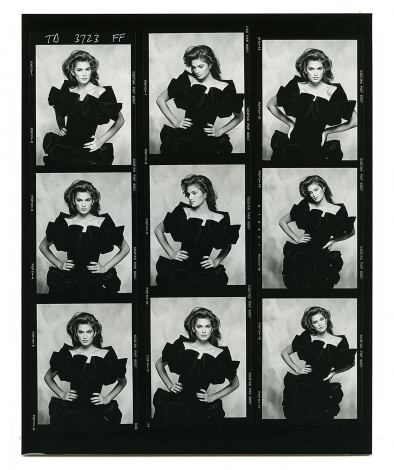 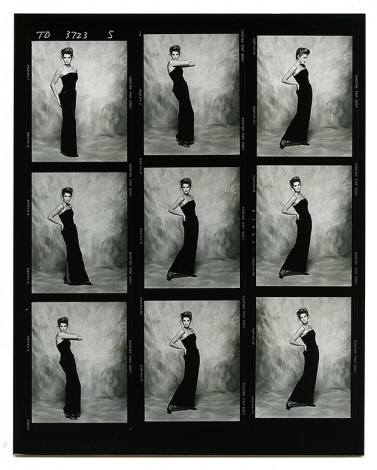 Anna Harvey is a Telegraph columnist and author of ‘Timeless Style: dressing well for the rest of your life’. She is the former Editorial Director for Condé Nast International and, in 1988, was Fashion Director of British Vogue.

TDA: Anna, you first worked with Terence Donovan in 1978. By the time of this shoot you had worked together for around ten years. What were you first impressions of Terence and did he like sittings to run in a certain way each time or did it vary from shoot to shoot?

AH: When I first worked with Terence I was in awe of him. He was a big man in every sense. After a decade of working together I had relaxed with Terry and I think he had with me. We trusted each other and understood what we both expected of the other.

TDA: You had worked with Cindy Crawford on a number of occasions prior to this shoot but it was the first and only time Terence and Cindy worked together. Do you have any recollections of the mood in the studio that day?

AH: There was an atmosphere of anticipation as Terence and Cindy hadn’t met before. I don’t remember Terry having any special way of dealing with new models, he treated them as he might anyone else he was meeting for the first time, with courtesy and interest. Both he and Cindy were such professionals that they soon established a great working atmosphere. They both gave the shoot their all.

TDA: Do you recall what your intentions for this shoot were? It’s notable how contemporary the pictures and styling feel despite being thirty years old, and this is obviously a key consideration for you bearing in mind the title of your book. Were you consciously aiming to create looks that would stand the test of time?

AH: On this particular shoot I wanted to get the best out of both photographer and model and I felt we achieved this. I think we achieved wonderful and classic Donovan images.

TDA: Five pictures from the shoot ran in the magazine, though there are some beautiful images and outfits which weren’t included (some unpublished shots and contact sheets can be seen above). How were images selected for publication?

AH: We over-shot as we were all enjoying the experience so much, although as you say, not all the shots were published. Liz Tilberis was the editor of Vogue at the time and she would have made the final selection of images.

TDA: In an interview in 1967 Terence commented “really good models – they make the…artificial thing of being on a piece of white paper justifiable. Most people, if photographed…look very embarrassed. They don’t understand what they’re doing there.” You understand what he was talking about when you look at these pictures of Cindy: she is able to occupy and ‘hold’ the space so comfortably (in 1988 she was 22 but had already been modelling for around five years). How much communication was there between you, Terence and the models you worked with in terms of the feeling you wanted them to convey through pose and expression?

AH: Cindy was one of the most experienced (even when very young) and professional models I ever worked with. She knew instinctively how to ‘work’ an outfit even on a plain white background. She understood how to give variety and how to help the photographer. Terence very much left it up to Cindy to decide how the outfit looked best.

TDA: Would you have a firm idea of the ‘feel’ you wanted to achieve in advance of a shoot or would you see what happened on the day once the model was on set in the clothes?

AH: One always had a feel for how one hoped the sitting would develop and sometimes it went in a completely different direction which was hard to control as the fashion editor. However, with Terence there was always a degree of certainty as to what the result would be which was very reassuring. He didn’t do his experimenting at Vogue’s expense.

TDA: Mary Greenwell was make up artist and Nicky Clarke was hair stylist on the shoot. How collaborative did the process feel between you all as a team? We have Terence’s treatment for the video he directed for Robert Palmer’s ‘Addicted to love’ in which he is very specific about the fashion, hair and make up looks he wanted. Did he often get involved with this side of things?

AH: My job was to keep everyone relaxed while dressing the model and conferring with hair and make-up – and the model too of course. Terry never told anyone how to do their job. Mary and Nicky were extremely experienced and did not need direction, but were very happy to take it from Terence if he felt he needed to comment. In the main though he kept away from the dressing room.

TDA: What are your strongest memories of working with Terence?

AH: I always loved working with Terry as he was so wholeheartedly involved in everything he did. He loved working for Vogue as they did with him. There was always the promise of a good lunch a few days later to discuss the shoot and relax. He was wonderful company, perceptive and full of humour.