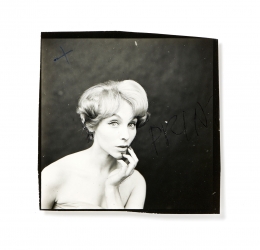 The Terence Donovan Archive was established in 1997. Over I million images strong, in black and white and colour, it documents Terence Donovan’s long career in photography, beginning in 1959 and ending in 1996. It comprises both negatives and prints of fashion and portrait photography for all major UK and international magazines including Vogue, Tatler, Harper’s Bazaar, and GQ and as well as commissions for the influential magazines of their time Queen, Town and Nova. Donovan is also held in high regard for his portraits, advertising photography and for his nude studies, as well as his fashion pictures from the 1960s.

In addition to his negatives and transparencies, the archive holds a large number of Terence Donovan’s magazines, diaries and daybooks, which contain meticulous records of jobs undertaken and technical notes and provide a unique insight into his working practices.

The Archive works to conserve and preserve Terence Donovan’s huge body of work and to share his images with fans and new audiences. The archive undertakes exhibitions (both public and commercial), book and film projects and regularly assists researchers, historians and curators.

A retrospective exhibition of his London photographs was held at the Museum of London in 1999 and a large-format anthology of his photographs ‘Terence Donovan: The Photographs’ was published in 2000. In 2012 ‘Terence Donovan Fashion’ was published, edited by his widow, Diana Donovan, and Donovan’s friend and colleague, the pre-eminent graphic designer, David Hillman. In 2015 Terence Donovan’s work featured as part of ‘Work, Rest and Play: British Photography from the 1960s to today’, an ongoing touring survey exhibition in China and at FOAM in Amsterdam in ‘Swinging Sixties London: Photography in the Capital of Cool’. Over the summer of 2016, the first major retrospective of Donovan’s work was staged at The Photographers’ Gallery in London. ‘Speed of Light’ (15 July - 25 September) spanned the entirety of Donovan’s four decade career. The Archive has also worked with Italian publishers Damiani to produce ‘Terence Donovan Portraits’, the first dedicated collection of Donovan’s portraiture.